Retinitis Pigmentosa, or RP, is the collective term which refers to a group of conditions.

All of these conditions are genetic and affect the eye in similar ways.

Here, we go over retinitis pigmentosa, including what it is exactly. We also take a look at some causes, risk factors, signs and symptoms, and finally, the treatment options which are available.

What is Retinitis Pigmentosa?

Retinitis pigmentosa causes a loss of the cells in the retina. The cells which are lost are those responsible for light detection, the photoreceptors. Because the condition affects your retina, it is classified as a retinal disorder or dystrophy.

Schedule your eye exam in our Bergenfield or Passaic office today!

We offer early, late, and Saturday appointments for your convenience. Most major medical and vision plans accepted.

With RP, the change in vision as the condition progresses is varied from person to person. But as a general rule, the progression of the condition runs over years as opposed to months. The speed at which vision decreases is also dictated by which type of RP you have.

What are the different types of Retinitis Pigmentosa?

Medical professionals don’t really distinguish between different types of RP per se. There are, however, different genetic paths that the condition takes. The following are some of the types of RP that may be distinguished:

Sometimes, retinitis pigmentosa happens because of, or as a part of, other pre-existing conditions. It should be noted that this is not common. When the RP is of this type it is called syndromic. Syndromic RP can occur with the following conditions:

Of these, Usher syndrome is the most likely to be linked to retinitis pigmentosa. 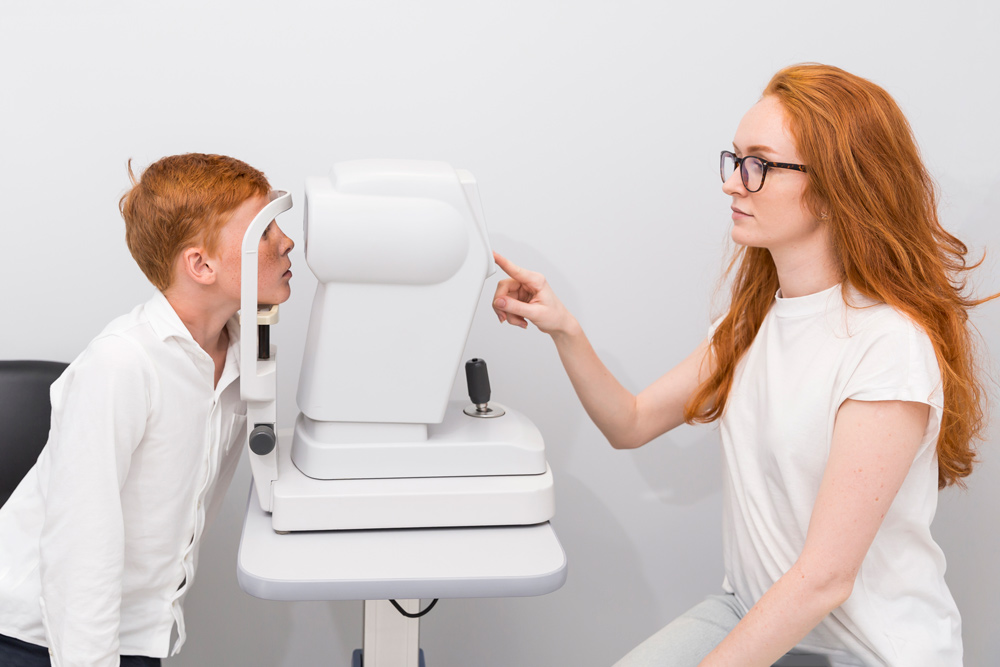 Retinitis pigmentosa is inherited. It is not caused by injuries or infections. Environmental and other external factors do not have an effect on whether an individual will have RP, either.

Inherited means hereditary, people who have RP were born with a defective gene which changed the body’s normal cell structuring. RP can be diagnosed from a young age.

Retinitis pigmentosa may also be the result of a gene mutation communicating with retinal cells. But most of the time the condition is due to a recessive gene. A recessive gene is one that has been inherited from both parents.

Dominant genes and X chromosome genes have also shown links to RP. If this is the case, it means that the gene has originated in one parent only.

The inheritance patterns for retinitis pigmentosa are named as follows:

In even rarer cases, a genetic mutation means that the disorder can appear in someone with no family history of RP.

Retinitis pigmentosa has also been shown (in very small numbers) to be linked to other disorders and diseases. These include Bassen-Kornzweig disease and Kearns-Sayre syndrome.

Because the condition is genetic, there are no real external risk factors that may contribute to the chances of getting retinitis pigmentosa. As such, there are no ways to prevent the disease.

If, however, you do have RP, you can reduce the chances of the condition progressing by avoiding prolonged exposure to the sun. There has been some recent research done which seems to indicate that some types of RP may be accelerated by over exposure to light.

Some women who have retinitis pigmentosa have reported a worsening of their condition while they were pregnant. But as of yet, there are no clinical studies which examine this link.

The signs and symptoms of retinitis pigmentosa often show up across a number of years. For this reason, we will make a distinction here between the early symptoms and the later symptoms.

Early signs may show up at any time past the age of 10. Later signs and symptoms are more likely to appear around the middle age point. It’s important to note though that some people do not experience any symptoms until much later in life.

Many people with retinitis pigmentosa are legally blind in the later stages of the disease. The condition is progressive meaning that there’s a gradual deterioration in eye sight.

Currently, there is no cure for retinitis pigmentosa. There are, however, a number of treatment options which may help to slow and/or manage the progression of the disease. These options will depend on how far advanced the condition is. For more information on your treatment and management options, please get in touch with an eye specialist.

Treatment options may include:

Research has shown that for some forms of retinitis pigmentosa vitamin A may be helpful.

Some people with RP may experience retinal swelling. In this case, medicated eye drops may be prescribed.

If you or someone you love has been diagnosed with RP, please come and see us at the New Jersey Eye Center, in Bergenfield, NJ. As leading eye specialists, we have vast experience with a range of genetic eye disorders.

We can also help you with learning more about this eye condition. Our friendly and professional staff have helped a lot of people with compromised vision over the years. Living with retinitis pigmentosa can certainly be a challenge, but with proper diagnosis and a treatment plan in place, the condition can be slowed.

Fill out the form and our team will be in touch with you promptly. Thank you for your interest!